RAISE Project among the top 20 in Europe 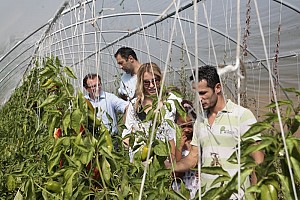 We are very happy to inform you that The European Commission included RAISE, a joint project of Ana and Vlade Divac Foundation, UniCredit Foundation and UniCredit Bank among the top 20 in Europe in the field of promoting and supporting entrepreneurship and integration of refugees and internally displaced persons.

This is the only project from South Eastern Europe, which was singled out as an example of good practice within the competition with over 200 projects. RAISE Project was realized with support of Novi Sad Humanitarian Center.

Project of Rural and Agricultural Integration in Supportive Environment (RAISE) was conducted in the period from 2009 to 2012 and has included 140 refugees and internally displaced persons from the Croatia, Bosnia and Herzegovina and Kosovo that have lived in collective centers until then. The goal of the Project was to support them to start their own business and achieve integration into the local community. As one of the preconditions for this, through the project, rural households were provided to the families and afterwards each family received grant in the amount of EUR 2,000 for initiation of income-generating activities. These families were provided with basic knowledge and skills to run small business.

Proud of the fact that many families included in the program have developed their own production, as a result of the agricultural component of the RAISE Project, the Ana and Vlade Divac Foundation, with support of donors, continued developing program for economic empowerment of those in Serbia who want to start and develop their own agri-business.

We invite you to join us in new human achievements and donate funds to support individual agriculture entrepreneurship in Serbia.