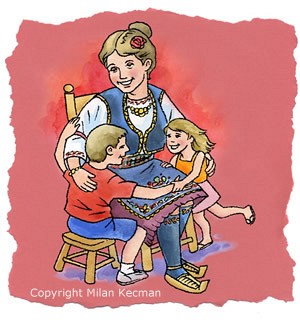 In the church services for the Feast Day of the Lord's Nativity there are three special Sundays, two before and one after Christmas. These are the Sundays of the Forefathers, Holy Fathers and God-bearing Fathers. On the Sunday of the Forefathers (in Serbian known as "Materice" Mother's Day) we commemorate in the services all the ancestors of the People of God, from Adam to Joseph, who was betrothed to Mary.

We mention all the prophets also, who preached about Christ, from Samuel to John the Baptist. On the Sunday of the Holy Fathers (known among us as "Oci" Father's Day) we celebrate all of Christ's ancestors according to the flesh who are mentioned in the genealogy in the gospels according to Matthew and Luke. On the Sunday of the God-bearing Fathers, after the Nativity, we remember Righteous Joseph, who was betrothed to Mary and King David as the direct ancestor of Jesus.

Awaiting the most holiest feast of the Nativity on earth, the Serbian people and Serbian church on the three Sundays leading up to this Feast commemorate our earthly family, which is the little Church and an image of God's love in the Holy Trinity. Therefore, it is a typical Serbian celebration just as the Krsna Slava is a Serbian celebration.

In the book "Veronauka u kuci" from 1982 it states: "In preparating for this most joyous day, exclusively among our Serbian people, are the three last Sundays before Christmas, which our people have special names: Detinjci, Materice and Ocevi (Children's, Mother's and Father's Day), as well as the days before the feast: Tucindan and Badnjidan.

On these Sundays of preparation before Christmas the folk customs are mostly the same everywhere. First fathers and mothers, on the third Sunday before Christmas, Children's Day, tie up their children in the morning, sometimes even the ones in cribs, and children have to "untie" themselves. Since this is always the Sunday after St. Nicholas, usually it is said that "St. Nicholas brings presents to the chidlren in the morning".

On the second Sunday before Christmas, called Mother's Day, fathers and children "tie" their mothers and they have to "untie" themselves. On the Sunday before Christmas, called Father's Day, mothers and children "tie" their fathers and they have to "untie" themselves. This mutual "untiying" is the mutual giving of the gift of love, which creates the festal, solemn atmosphere in the family, Christian circles. Such a festal atmosphere was created by the Wise Men who came from the East to the Holy Family of the Christ Child prostrating themselves before Him at the cave in Bethlehem, with the gifts of myrrh, frankincense and gold. The symbolism of this mutual "tying" and "untiying" of children and parents is clear: we are preparing ourselves in welcoming the most joyous Christian feast - Christmas, that reconciled man with God untiying him from the bonds of sin, and binding him with the new ties of love for God. In the desire, therefore, that we welcome His coming bound with the tightest ties of mutual love, since He too is Love, which is the "bond of perfection" and on Children's, Mother's and Father's Day we are mutually being "tied" and "untied". This tying and untiying goes beyond our family cirlce and goes to our relatives, friends and all of our acquiantances and thus the spontaneous tying and untiying of all Serbs, Orthodox Christians, before the Feast of the Nativity of our Savior, occurs, who unbound Adam and Eve of eternal death and gave them life eternal.

And so, the Serbian people exclusively created this based on their own experience of our Christian-Orthodox calendar which is also our Serbian national calendar. Children's, Mother's and Father's Day are, therefore, our national holidays strung upon the forefeast of the Nativity of Christ, so that in the middle is Mother's Day, the day of mothers, since mothers are the tie according to which we say, "if there were no mothers, there would be no world".