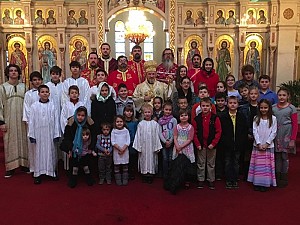 Akron, OH - With the Archpastoral Blessings and the presence of His Grace Bishop Dr.MITROPHAN, the Seventh Annual Diocesan Winter Retreat of the Eastern American Diocese was held December 28-30, 2015. The retreat was held at St. Archangel Michael Serbian Orthodox Church, Akron, Ohio.

The schedule for Monday and Tuesday including morning prayers and evening Vespers. During the mornings classes were held. The theme for the retreat was:: “Listening to Our Youth-Discussing the Future.”  On Monday morning, Father Milan Pajic spoke on the topic: Youth and Adult Participation in Parish Life.”

Also on Monday, Father Zivojin Jakovljevic and Father Aleksa Pavichevich discussed with the participants the topic: “Is the Priesthood in Your Future?” Monday afternoon included play practice, recreation in the hall and bowling.

On Tuesday afternoon, an additional play practice was held. Father Pajic oversaw the play practices. Bible-based games were played. The youths had free time in the parish hall. Confessions were heard on Tuesday evening

With His Grace Bishop Dr.MITROPHAN in attendance, the youths performed the Christmas-oriented play on Tuesday evening. Parents, family members and parishioners were in attendance.

On Wednesday morning, His Grace officiated at the Hierarchical Divine Liturgy with five priests and a deacon serving. His Grace met with the youths following breakfast. The youths had the opportunity to ask His Grace questions and discuss their participation in the retreat.

Popadija Jelena Pajic enlisted helpers from St.Archangel Michael Church to help with the meals served each day. Anita Ondreyka helped with the singing in church. Thirty-two youths participated in the retreat. 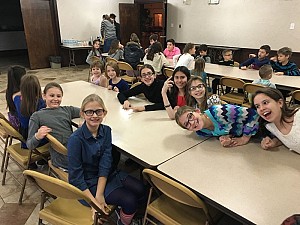