St Petersburg, FL - The St Sava Serbian Orthodox Church in St Petersburg, FL held summer camp, beginning on June 23, and it was held every Tuesday and Thursday through August 13. That is 16 days! This approach seemed too ambitious to some, but it turned out to be just right.

Most days began with prayers, both in English and Serbian. Not much - the Trisagion and Creed, but enough to encourage the children to continue with them afterwards. Because of liturgical calendar, however, we celebrated six liturgies together, the children, led by Tetka Dragana Petrovic, actively participating in the responses.

Over the course of the summer 35 children participated in the camp, with an average of 27 children a day.

It was bring your own lunch. Costs were minimal. We had a few teenagers, Tanja and Ognjen Kisin and Maja Obrenovic, who helped Fr. Stephen. We had lots of play time, two excursions to the local pool and Chuck E Cheese. The last day we spent at Bush Garden’s water park - Adventure Island.

We read our Children's Bible Reader every day, discussing what we read. We learned some traditional Serbian songs, religious songs, both in Serbian and English, learned some liturgical music, both in Slavonic and English, and practiced reading Serbian in the cyrillic alphabet.

It was wonderful. Fr. Stephen had the opportunity to spend a lot of time in direct contact with the children, who looked forward to every day of camp. Some of them even passed up invitations from their friends to spend the day at a local amusement park because they had camp!

One little boy expressed his disappointment when he learned that there were no more Divine Liturgies scheduled on camp days! His explaining how he experienced the Liturgies was astounding! (Small children are naturals in Church - Do we not have to become like little children to enter into the Kingdom of God? We should never neglect to bring them for any reason whatsoever!)

Our Orthodox faith is beautiful, rich and powerful. It is full of Life, Grace and Truth. We must impart this to our children in these ever darkening days! We can only do this by bringing them to the Holy Church and practicing together what we learn there. 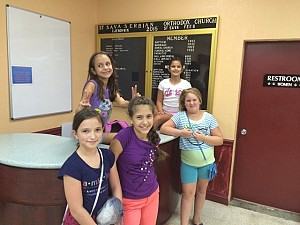