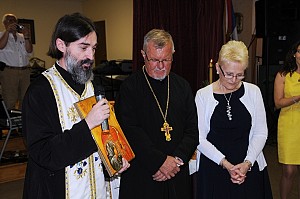 Clearwater, FL - Sunday Feb. 08, 2015 was the Tradesmen Slava, the Three Hierarchs which is observed on Feb 12. A tradesman is a skilled manual worker in a particular trade or craft. Your electrician, general contractor, air conditioning technician, the framer, the block mason, the slab guy, the dry wall guy, the plumber and many more that I have not mentioned. We have all used a tradesmen at one time or another.

The Three Hierarchs of Eastern Christianity refers to Basil the Great, Gregory the Theologian and John Chrysostom.They were highly influential bishops of the early church who played pivotal roles in shaping Christian theology. In Eastern Christianity they are also known as the Three Great Hierarchs and Ecumenical Teachers. The three are venerated as Saints in Eastern Orthodoxy, Catholicism, Anglicism and other Christian churches.

Divine Liturgy was served by Father Dragan Zaric, Father Jovan Todorovich, Father Peter Tutko and Father Milan Stojanovich.The Blessing and cutting of the Slava Kolac took place in the church hall after Divine Liturgy. A delicious luncheon was served by our Kolo sisters and our Chef Sinisa. This year's Slava Hosts were Sasa and Sandra with Zoran Milic accepting to be next year's Slava Host. We had a nice turn out of parishioners who stayed and enjoyed the luncheon with friends, family and Kumovi. Father Dragan also honored our Father Jovan Todorovich and Protonica Mirijana on 50 years of wedded bliss. Hope to see everyone next year. 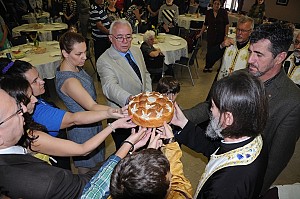