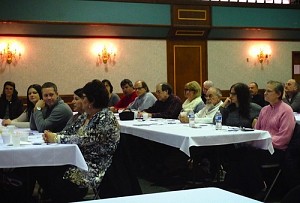 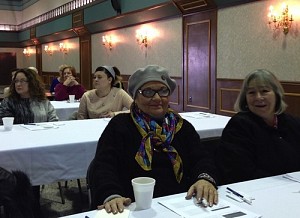 North Canton, OH - On Saturday, January 31st, St George Serbian Orthodox Church in North Canton hosted the first-annual Three Hierarchs Seminar. This event, offered by the Orthodox Clergy Brotherhood of Stark County, brought in a speaker for the edification of faithful Christians in Stark and Summit Counties. This year’s topic was “Dealing with Grief, Loss and Suicide”, with guest speaker Holly Torbic, the program director of the Tides Foundation located in State College, PA.

Speaker Holly Torbic offered her wealth of personal wisdom on companioning others through their grief journey. She gave each participant an idea of how the different developmental ages view death and grieve. Her valuable words on the loss of a spouse, and suicide, brought much comfort to those who attended.

The participants gained such valuable insight and healing form Holly’s presentation that they immediately requested a return visit so that more in our Stark/Summit County communities could benefit from her words.

This event was made possible through the cooperation of the clergy in Stark County, the dedicated volunteers of the St George Circle of Serbian Sisters, and St George parishioner George T. George who offered to cover the food expenses.