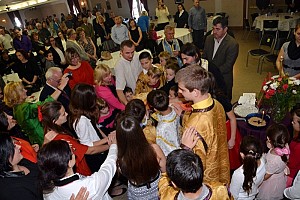 Clearwater, FL - St. Sava is widely considered as one of the most important figures of Serbian History and is canonized and venerated by the Serbian Orthodox Church as its founder, on January 27. He is the patron saint of Serbian schools and schoolchildren.

The Cathedral of Saint Sava in Belgrade is dedicated to him, it was built on the scene where the Turks burnt his remains in the 16th century, following an uprising in which the Serbs used icon depictions of Sava as their war flags.

Sunday Feb 1, 2015 was the day St. George church Celebrated St. Sava day. The delicious luncheon was prepared by our wonderful Kolo sisters and Chef Sinisa. After the luncheon the school children with their teachers put on a most enjoyable program where they sang songs and read poems about the life of St. Sava to the delight of their parents and all in attendance. After the program Father Dragan Zaric gave each child a gift to commemorate this joyous day. 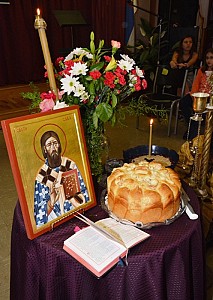