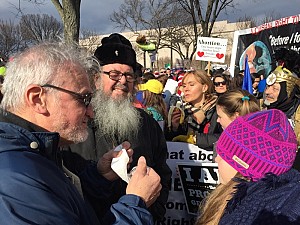 Washington, DC - This year’s Annual March for Life took place in Washington D.C. on Thursday, January 22, 2015. Thousands of people of all ages gathered with the common purpose of affirming the preservation of the lives of the unborn. The March for Life is a collective expression of the value of life. Thousands come together peaceably and march in an orderly fashion. The marchers come from various backgrounds and throughout the United States and beyond.

People of different races and religious identities are involved in the March. The large amount of young marchers reflects well on the condition of youth in this country and is a sign of hope for the future. Christians are the largest group. I travelled with a group from Holy Trinity Orthodox Church in State College, Pennsylvania led by Rev. Deacon Alexander Cadman. My granddaughters Brittany Joy and Jesse Hope came for their third March. Our group joined with hierarchs, clergy and faithful Orthodox Christians from different communities. At the conclusion of the March, a memorial service was held for the unborn having lost their lives through abortion.

Participating in the March takes effort and travel is involved. The weather some years has been very cold. Marchers were present this year from as far away as North Dakota. Endurance and commitment are necessary to participate. The March is a definitive statement that each person is important from the very beginning of life. The March is a way to stand and speak in defense and for those yet without voice. Participating in the March stimulates personal reflection on the value of life and the societal treatment of life. The March serves as a basis to think carefully about how the government, healthcare facilities and institutions view the unborn. The March enables individuals to take a position in defense of life. The March stands against violence. The need for healing certainly exists among those having chosen abortion and are now regretting it. This was the fourth March for Life in which I participated. Participation is with the Archpastoral Blessing of His Grace Dr.MITROPHAN. The March for Life is an important and valuable investment. 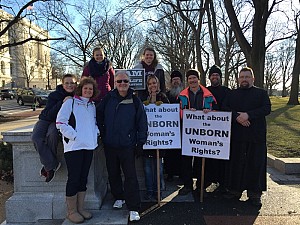