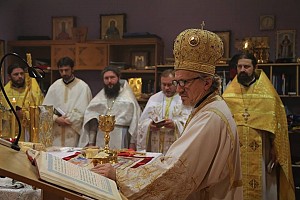 Jacksonville, FL - On the Feast of the Synaxis of Archangel Michael and the Bodiless Powers, the church of St. John of Shanghai was consecrated in Jacksonville, Florida.  Although the community had been in existence for quite some time, they were only able to gather for Divine Services in temporarily leased office space.  Three years ago Archpriest John Voloshchuk bought a plot of land and construction of their new church began.

The event was marked by the episcopal presence of His Grace Bishop Dr Mitrofan of the Eastern American Diocese of the Serbian Orthodox Church, who consecrated the church. His Grace also served Hierarchical Divine Liturgy along with visiting priests from all over the world, including San Francisco, New York, Miami, Moscow and Yekaterinburg. Parishioners and clergy enjoyed the visiting children's choir, "Okoikh", who sang at the All-Night Vigil and Divine Liturgy. 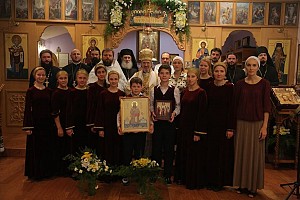