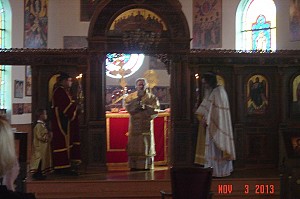 Carmichaels, PA - His Grace Bishop Dr. MITROPHAN came to the St. George Serbian Orthodox Church in Carmichaels, Pennsylvania on Sunday November 3, 2013 to celebrate the Hierarchical Divine Liturgy. When the Diocesan Bishop comes to the parish to celebrate the Hierarchical Divine Liturgy, the fullness of the Church is joyously experienced. Sunday, November 3, 2013 was a special day at St. George Church.

The parish celebrated the Fifty-Ninth Anniversary of the consecration of the St. George Church.  Diocesan Secretary Father Deacon Branislav Golic and Episcopal Secretary Milovan Jovanovic accompanied His Grace and participated in the Divine Liturgy. Deacon Branislav’s wife Dragana and Milka Jovanovich came from the Diocese for the Divine Liturgy and Anniversary celebration.

Church school students Anya and Ksenije Sivak preceded His Grace strewing flower petals as He entered the church for the Divine Liturgy. Linda Porter read the Third and Sixth Hours

His Grace preached on the theme of love as proclaimed in the Holy Gospel. The St. George Choir under the direction of Sonia Janson sang the responses. St. George parishioners came to church in greater numbers for the Anniversary.

Following the Divine Liturgy, the Anniversary banquet was held at Dolfi’s  in Masontown, Pennsylvania. A superb meal was served. St. George Church Executive Board President was Master of Ceremonies and heartily greeted and welcomed all in attendance.

Reverend Father Milan Medakovich of Holy Ascension Serbian Orthodox Church in Youngwood, Pennsylvania joined the banquet celebration. The St. George Church was first served in the early 1950’s by the priest at the time in Youngwood. The bond between the parishes continues.

Sonia Janson spoke in behalf of the St. George Choir and Kolo. Parish Nurse Practitioner Millicent Mitzie Hunchuck as well as Sonia Janson read from writings of St. Nikolaj of Serbia as did Aaron Carson, Mildred Bezjak and Christina Sivak.  Attorney Linda Chambers spoke on the theme: “Rights and Protections Offered to Churches.”

His Grace addressed the attendees at the banquet. In His remarks, His Grace drew attention to the value St. Nikolaj of Serbia’s writings personally benefit individuals.

In addition to St. George parishioners, area friends and supporters of the parish attended the banquet. Masontown Mayor Toni Petrus and Chief of Police Joseph Ryan came as they have previously. Additional attendees were from parishes in Aliquippa, Monroeville, Pittsburgh and Fairmont, W.Va.

Thanks be God, to His Grace Bishop Dr. MITROPHAN and for all participating in the Fifty-Ninth Anniversary celebration. 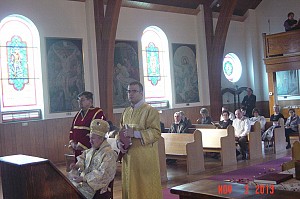