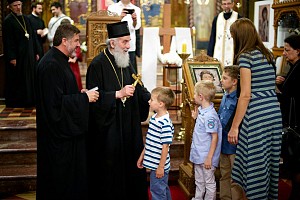 On Wednesday, September 4, 2013 His Holiness Serbian Patriarch Irinej, together with Fr. Vladimir Vranic, arrived at JFK airport in New York City. They were greeted by the Ambassador of Serbia, His Excellency Vladimir Petrovic from Washington D.C., the Ambassador of Serbia in the UN, His Excellency Milan Milanovic, the General Consulate of Serbia from NYC, Her Excellency MIrjana Zivkovic, and the Very Reverend Father Djokan Majstorovic, the Dean of the Cathedral of St. Sava in NYC. After the guests were warmly welcomed, they traveled to the Cathedral of St. Sava for an evening Vespers service.

The next day the guests were accompanied by His Grace Bishop Dr. Mitrofan to visit the General Consulate, the Serbian UN Mission and to meet with Vuk Jeremic, President of the UN Assembly. In the evening, Vespers was served in the presence of His Holiness Patriarch Irinej, His Grace Bishop Dr Mitrofan and clergy form the Washington-New York deanery. At the end of the service His Holiness addressed the faithful in attendance, around 150 people. He called upon those present to keep their faith and heritage, especially the Serbian language and the Serbian alphabet "cirilica". He further called for the faithful to keep unity and love among themselves just as our Lord and St. Sava, the patron of New York's magnificent Serbian Cathedral, taught us. His Holiness Patriarch Irinej blessed the faithful and distributed the icon of the Mother of God Trojerucica from Hilandar to everybody.

On Friday, September 6, His Holiness gave a lecture in the UN on "The culture of peace and our responsibility". The lecture was well received and His Holiness was complemented by many listeners, including the Deputy of the Secretary of the UN. Following Vespers that evening, HIs Holiness visited the Very Reverend Djokan Majstorovic and his family in the parish house before departing the following morning for Chicago.